Implant surgery according to the All-In-One concept 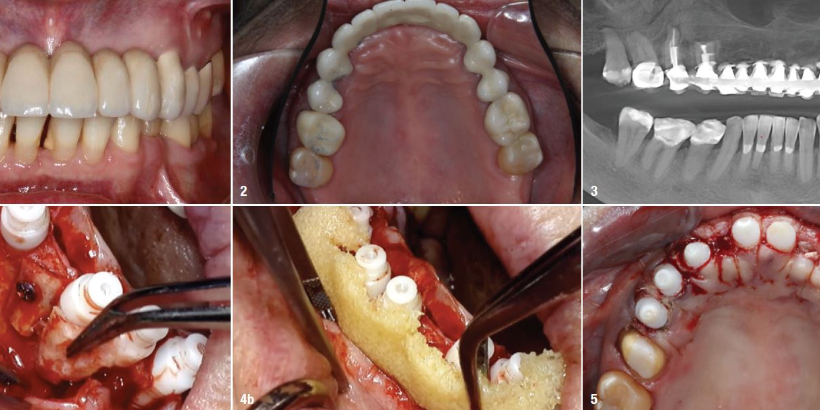 In issue 1-2021 of the magazine ceramic implants, Dr Corbin Popp (USA), Dr Rebekka Hueber & Dr Karl Ulrich Volz (both Switzerland) are featured with a technical article on the topic of “Implant surgery according to the All-In-One concept”:

The 72-year-old female patient presented on referral for a comprehensive biological approach to restore her failing prosthetic dental work composed of porcelain-fused-tometal crowns and bridges (Fig. 1). Her motivations were to maintain overall health and to have lasting dental work with biocompatible materials. She had a history of trauma, multiple missing teeth, multiple root canal therapies, a history of recurrent decay and periodontal disease. Her occlusion appeared to have a mandible-to-cranial base discrepancy with significant first touch and slide coupled with multiple posterior interferences. She reported previous migraine and clenching at times. The long spanning PFM bridge from #14–24 was class 1 mobile. Additional PFM crowns were at #16, 17, 25, 26, 36, 44, 46. In addition, she had multiple failing root canal treated teeth #15, 14, 25 and questionable prognosis for #24 with periodontal bone loss. She had slight mobile lower incisors with moderate recession and subsequent black triangles were apparent with moderate crowding. Aesthetically, the patient was unhappy with the shape of her current teeth. After complete examination, she expressed interest in a comprehensive programme to restore her bite using non-metal materials. Immediate implantation with ceramic implants (SDS Swiss Dental Solutions) according to the All-In-One concept (SWISS BIOHEALTH) and long-term fixed temporaries were discussed. She was referred to the Swiss Biohealth Clinic for surgical planning, once she had completed the pre-surgical site work of the first author, who removed metal PFM restorations and mercury fillings, and placed composite core build-ups with Luxatemp provisional crowns (Fig. 2).

The initial examination at the Swiss Biohealth Clinic revealed that teeth #5, 6, 12 and 13 were not worth preserving due to horizontal and vertical bone loss in the maxillary anterior region. The CBCT scan revealed ischemic osteonecrosis in the sense of FDOJ (fatty-degenerative osteonecrotic jawbone; Fig. 3). A vital part of the SWISS BIOHEALTH CONCEPT is to strengthen the immune system of patients to achieve optimal bone healing: four weeks before surgery, patients begin to supplement a mixture that contains every micronutrient necessary for an optimal support of the body’s own regenerative mechanisms and which has a pre-biotic effect. The mixture is taken for another four weeks after surgery. In this way, the vitamin D3 value is raised to 70 ng/ml, which allows optimum bone growth. One day before surgery, the patient received an infusion of vitamin C, vitamin B12, sodium bicarbonate, magnesium sulphate, procaine and Ringer’s solution. Surgery was performed the next day according the All-In-One concept. During the entire treatment, the patient received a BTPII infusion containing vitamin C, procaine, magnesium sulphate, sodium carbonate and vitamin B12. At the end of treatment, the vitamin C infusion is replaced with a pain-relieving infusion. It is crucial not to impair the body’s immune system and its healing mechanisms by activating the sympathetic nervous system.

The full article is featured in the magazine ceramic implants.